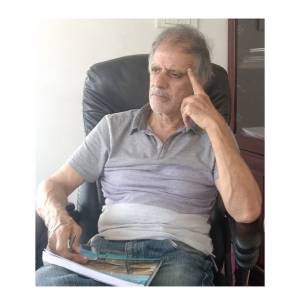 The author, Dr. M. A. Kawosa is from Kashmir, India, and educated at Indian Forest College, Dehra Dun, Universities of Kashmir, and Saurashtra in India; Osnabruck and Vechta, universities of Germany and university of Norwich, UK. At the University of Saurashtra, he received a Ph.D. in Experimental Biology. He worked as a postdoctoral fellow at the University of Osnabruck, Germany, and earned a PhD. in Remote Sensing from Vechta University, Germany. He is a member of the Indian Forest Service and worked mostly with the Forest and Environment Departments of Jammu and Kashmir Government for almost 35 years in various capacities as Chief Conservator of Forests, Director Environment, Chief Integrated watershed Development and Managing Director, Forest Corporation. Dr. Kawosa is the author of the acclaimed books “The Forests of Kashmir - A vision for the future” and “Remote Sensing of Himalayas”, both published by Natraj Publishers, Dehra Dun, India. Dr. Kawosa’s contribution to Forests and Environment departments of the country has been immense, having many scientific publications, International and National, to his credit. Dr. Kawosa worked closely with Prof. Dr. H. Leith of Osnabruck University, in Germany, on numerous projects including “Interaction between Climate and Biosphere” in the early nineteen eighties. He is widely traveled and presented his research work in countries like Austria, Germany, Japan, Sweden, Turkey, and many other countries. His interest in mysticism springs from his family background, which had a close association with Sufis and Sufi shrines of Kashmir. He devotes most of his retirement time immersing in the Sufi literature, particularly the Sufi poetry of Kashmiri Sufis, which he has extensively quoted in his book. He has elaborated on the wisdom of Sufi masters of Kashmir and connected us to the essence of our Being-the consciousness.